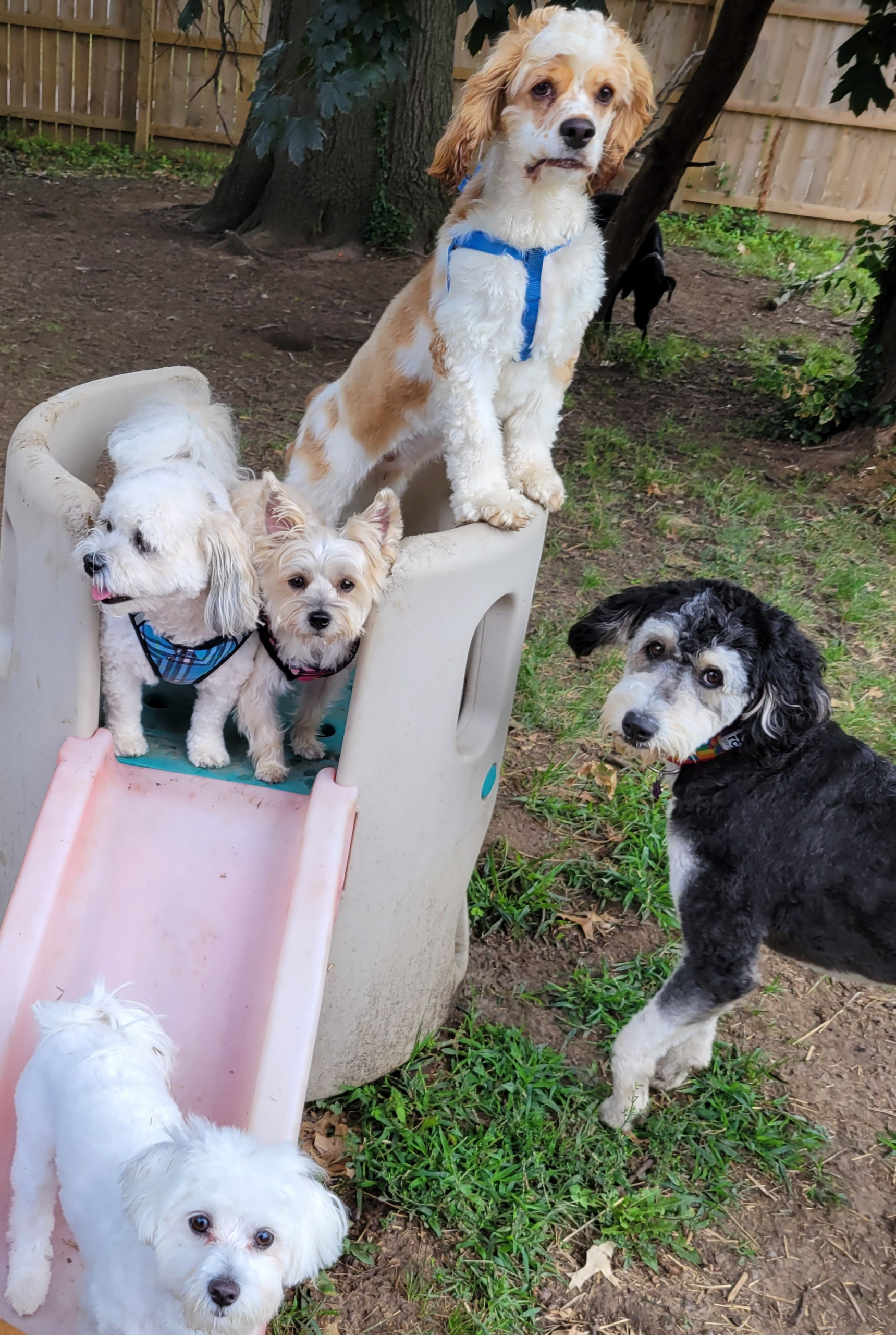 Alpha Dogs….I have to admit I was wrong about a few things regarding dogs. Before I owned a doggie daycare and boarding company I thought of the alpha dog as the “baddie” around. Ya know, the one that barks aggressively at other dogs, chases them away, nips at them or even flat out attacks other dogs. I had in mind that the “alpha” demanded respect and made other dogs follow his or her “rules”.

I have learned so much about dogs in 8 months, what I thought I knew about Alpha dogs is pretty much WRONG or at least misunderstood!

Over the last 8 months or so I have been around well over 50 different dogs on a regular basis (not all at the same time, phew!). I have realized an error in my previous thinking. Gardenia was happy to validate this my new found understanding and may have chuckled as I explained to her what I had come to realize.

What I had previously thought as “alpha” characterstics were actually bullying traits, and just like most human bullies, they act out of fear.

Alpha dogs are a bit more nuanced than what most people think. They don’t have to force other dogs to comply, they just do. They are the ones that other dogs want to hang out with and play with because they have a certain air about them.

Think about someone you know that that has an attractive personalities. People want to be friends with and you can’t put your finger on exactly why. They have that “je ne sais quoi” thing about them. Unless you see the dog interacting with many other dogs, it’s easy to miss the actual signs that Alpha dogs put out.

Alpha dogs aren’t aggressive for no reason. They don’t just push dogs around because they can.

They don’t have to bark in other dog’s faces to tell the other dog they are the alpha. Dogs just know and accept it. Sometimes I hear someone say, “…he’s an alpha male so he just wants to other dogs to know he’s in charge.” That’s what I used to think too. But now I know that alpha dogs don’t decide they are in that role, the rest of the pack puts them there.

You may see a disagreement between 2 dogs that appears to be a fight for the highest rank. It is most likely because at least one of the dogs is actually afraid or lacks confidence and is trying to overcompensate. The Alpha is going to protect themselves but they have also been assigned by the pack to protect the pack.

When a dog that lacks confidence and puffs his chest (literaly and figuratively) the alpha dog is not going to back down.

Many times what you see as a standoff into an actual dog fight is at least one dog that lacks confidence (possibly both of them). But if either one were the top dog, they wouldn’t have to prove it. If you know what to watch for you realize that the alpha is not the instigator in nearly all of these situations.

Just like humans, some alpha dogs are fun and will play with other dogs. Others are kind of jerks like giving a deep growl at a food bowl or pushing their way through a door or they may not engage in play and completely ignore dogs that want to engage with them.

Most of the time they don’t need to display these behaviors because the other dogs naturally submit to what they want.

Dog behavior is incredibly interesting to me. I recently found this article from Arizona State University that gives even further insight to Alpha behavior where human meets dog.  https://news.asu.edu/20210805-discoveries-myth-alpha-dog